Corvus the Crow -Spring Sky
A small but quite prominent constellation which is at its highest in the late spring evenings, the crow is low in the sky depicted sitting on the back of the water snake.
According to legend Apollo sent the crow to bring the water of life, but was unable to resist the unripe fruit of the fig tree, he let the cup of water (the constellation of Crater) fall to the ground. Realising that he was taking too long he hurried back to Apollo who discovered the truth and banished the crow to the sky. Another version has this same story but with Noah and the ark.
Four principal stars, Delta, Gamma, Epsilon, and Beta Corvi, form a quadrilateral shape, none are particularly bright but because they are in a barren part of the sky making the shape easy to see.
The brightest star in Corvus is gamma or Gienah which means ‘Wing’ is a star of magnitude 2.6, Gienah is a B8 giant star much hotter than the Sun, it lies at a distance 154 light years.
Beta is a magnitude 2.7 and is located 146 light years away, its a G5 giant star cooler than the Sun.
Delta or Algorab, which means the ‘Crow’ is a magnitude 3.0 star lying 87 light-years from Earth. Algorab is an A class star.
Epsilon has the traditional name Minkar, which means ‘The Nostril of the Crow’ and is a magnitude 3.0 star lying at a distance of 318 light-years from Earth. It is an orange K2 giant star.
Alpha or Alchiba, which is just below epsilon the meaning is unknown is a F1 class star, it has a magnitude of 4.0, and is 49 light-years from Earth.
As we have noted the star labelled alpha is not always the brightest star in a constellation. In Corvus alpha is actually the fourth brightest. 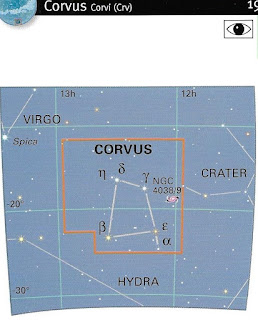