Corona Borealis The Northern Crown
Corona Borealis the Northern Crown which was given as a wedding present by Bacchus to Ariadne and was then cast by him into the sky when she died. It consists of an arc of seven fairly faint stars with the exception of alpha.
Alpha or alphecca which means ‘the bright (star) of the broken (ring of stars)’ is an AO class star at magnitude 2.2. it lies 75light years away.
Beta of Nusakan which means ‘The two lines (of Stars)’ is 112 light years distant. It is an A9 class star with a magnitude of 3.7
Gamma has a magnitude of 3.8 and is a B9 class star, it is 146 light years away.
There are two special variable stars in this small constellation.
R Coronae Borealis is a yellow supergiant which usually is just at the limit of naked eye visibility at magnitude 6.0 but at unpredictable times it will fade to as faint as magnitude 14. It is thought that this is caused by carbon rich particles building up in the atmosphere blocking the light from the star reaching Earth. These particles then disappear and the star then brightens once again.
There are only about 100 of these stars known. R itself was discovered by Edward Piggot in 1795.
T Coronae Borealis is also know as the Blaze Star, its a nova which erupted in 1866 reaching magnitude 2.2 and going novae again in 1946 reaching magnitude 3.0. It is called the Blaze Star because until around 20 years ago it was one of the few stars that had been observed to go novae more than once. Astronomers know today that all nova erupt more than once on times scales of decades or centuries. 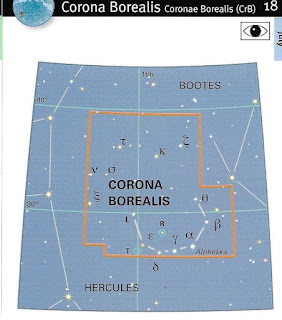