Corona Australis The Southern Crown
Corona Australis the Southern Crown is a counterpart in the southern hemisphere for the Northern Crown or Corona Borealis in the northern hemisphere. It is formed of a curve of faint stars which is easily recognisable, however it cannot be seen from Britain.
It has been known since the time of the astronomers of ancient Greece and in mythology was said to have been worn by the centaur Sagittarius which it lies next to in the sky.
There are only two stars worth mentioning,
Alpha at magnitude 4.1 and lying 125 light years away and is an A class star
Beta which lies just beneath alpha is also of magnitude 4.1, it is an orange K3 class giant star 470 light years away. 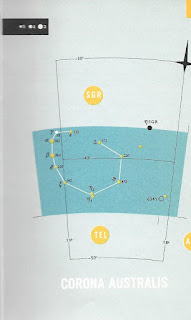