Coma Berenices - Berenice’s Hair
Yet another faint constellation with no really bright stars, although it has an ancient legend it was only formed by Tycho Brahe in 1601. According to legend Queen Berenice of Egypt vowed to cut off her beautiful hair and place it in the temple of Venus, provided that her husband returned safely from a war against the Assyrians. When the king returned Bernices kept her promise and so impressed the gods that they transferred the flowing locks of her hair to the night sky.
Alpha or Diadem which means the ‘Braid’ is of magnitude 4.3 which is 58 light years away, it is a F5 class star somewhat hotter than the Sun.
A line drawn upwards from alpha points to beta also at magnitude 4.3 and is 30 light years distant, its a G0 class star slightly hotter than our Sun.
To the right of beta is gamma slightly fainter at magnitude 4.4, it lies 170 light years distant and is an orange K3 class giant star cooler than the Sun.
The rest of the constellations seems blank but if the sky is really clear there appears a shimmering effect in this part of the sky, this is the faint glow from the 30 or so galaxies that make up the so called Coma Cluster of Galaxies, which can of course be seen better with binoculars and larger telescopes.
All of the main stars and galaxies in Coma Berenices cannot be seen if there is any mist or haze around.
I cannot resist mentioning one galaxy that you would need a telescope to find this is M64, the Black Eye Galaxy which was discovered by Edward Pigott in 1779 while living at in Frampton House, Llanywit Major in Wales. Edward Pigott would go onto York to work with the deaf astronomer John Goodricke and I christened them ‘Fathers of Variable Star Astronomy’ because of their work on variable stars. 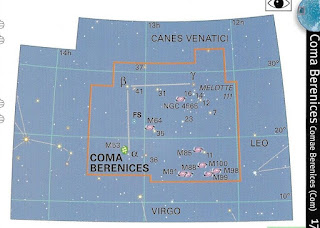