Circinus the Pair of Compasses – Southern Sky
Another small and obscure constellations added to the southern sky by the French astronomer Nicolas de Lacaille in the 18th century. There does appear to be a lack of imagination ith the constellation, there are no stars to represent the compasses. It is the 4th smallest constellation in the sky.
The brightest star is alpha at magnitude 3.2 lying 54 light years away, it is an A7 class star.
The only other star worth mentioning is beta at magnitude 4.1 and is 93 light years away. It is an A3 class star.
Circinus could easily have been absorbed into the neighbouring constellations of either Centaurus, or Trianglulum Australe. 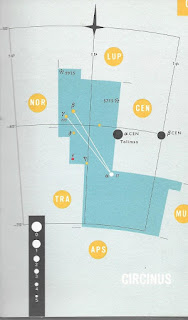