Chameleon Circumpolar Southern Hemisphere
A very dull and bland constellation, Chamaeleon is a small constellation which can be found close to the South Pole and therefore invisible from Britain. Unlike many other animals named for the southern skies such as the Thrush, Cat and Reindeer it has remained in use. It was named after the Chamaeleon which can change its colour. It was added to the night sky in 1598 by the Dutch astronomer Petrius Plancius.
The constellation like the lizard it is named after can be difficult to locate as there are no bright stars. None of the stars have any names and there is no mythology attached as this group was not known to the Greeks.
Alpha is a magnitude 4.1, 64 light years away, it an F5 class star hotter then the Sun.
Beta is a B4 class star much hotter than the Sun and has a brightness of magnitude 4.2 star and is 300 light years away
Gamma is a K5 orange giant star cooler than the Sun and is 420 light years away. 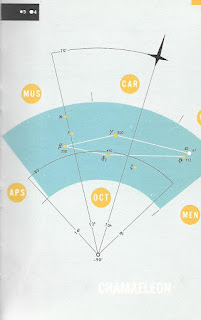