Cetus the Whale or Monster- Autumn Sky
Cetus is a Large constellations with few bright stars, a line drawn down from the two left hand stars of the square of Pegasus will lead to a magnitude 2.0 star this is beta ceti, although not a particularly bright star it is in a very barren area so is quite easy to see. To be honest the rest of Cetus is not easy to locate as it is low down in the south and any haze in the sky makes it difficult to see many of the stars of Cetus.
In mythology Cetus was the kraken, the monster sent by Neptune to eat the princess Andromeda, the monster today has turned into a more harmless Whale.
Alpha or Menkar which means ‘Nose’ is a magnitude 2.5, M1 giant class star, lying 250 light years away. As it is a red giant it is much cooler than the Sun.
The brightest star in Cetus is beta or Diphda which means ‘Tail’. It has a magnitude of 2.0 and is a K0 giant star. Although it is hotter than Menkar, Diphda is still not as hot as the Sun.
Tau Ceti is mentioned here only because it has appeared in many science fictions films and shows. It is a magnitude 3.5 star lying around 12 light years away. It is a G8 class star fairly similar to our Sun.
Since 2012 there has been evidence of at least 5 planets orbiting the star, even before this Tau has appeared in much science fiction. There have around 30 different novels and tv programmes including Star Trek the Next Generation, Star Trek Voyager and Star Trek Enterprise. The star also figured in Dr Who in 1975 and in the 1968 film Barbarella.
If Tau has some notoriety then it is omicron that takes the astronomical show.
Omicron or Mira which means ‘The Wonderful’. Mira has a long history. It was seen by the Dutch astronomer Fabricius in 1596 and recorded as being of the third magnitude, but a few weeks later it could not be seen. Johann Bayer the German astronomer who allocated the Greek letters to the stars in the constellations saw it in 1603 and allocated it the omicron, but after a few weeks it had disappeared again.
It was the first star to be recorded as a variable star and was accordingly given the title of the wonderful. It is unclear if the astronomers of ancient Greece were aware of the light changes in Mira.
The name was first used the Polish astronomer Johnanne Hevelius in the 1662. It was later established that Mira has a period of around 331 days and at its brightest it can become as bright as the North Star, but when at its faintest it drops to magnitude 10 and cannot be seen even with binoculars or a small telescope. The maximums are quite unpredictable and sometimes at maximum it will not even reach the 4th magnitude.
Mira is around 270 light years away and is a M7 giant star and has a surface temp of 2,700-2,900 ‘C much cooler than the Sun.
Mira is the prototype for the Mira type variable stars. This is a class of many 100s of red giant stars which vary in light range of 5-9 magnitudes over a period of about 60-700 days. 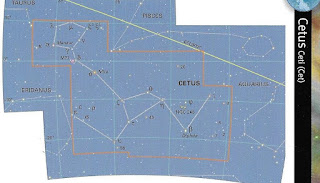