Cepheus The King
It has often been said that “The female of the species is more deadly than the male”. In the case of the constellations and with the story of the Cassiopeia legend, the female of the species is certainly the more conspicuous than the male, since King Cepheus cannot be compared with his wife Cassiopeia.
Cepheus is not particularity easy to identify since he is faint and has no obvious shape. A good way to find Cepheus is to draw a line from Dubhe and Merak the pointers in Ursa Major pass through the North Star and you will reach a faint 3rd magnitude star, Gamma before reaching the more easily found ‘W’ of Cassiopeia.
Cepheus takes the form of a large rather faint diamond which is in the area between the North Star, Cassiopeia and Deneb in Cygnus one of the stars in the summer triangle.
Alpha or Alderamin which means ‘Right Shoulder’ has a magnitude of 2.5 it is an A8 class star and is 49 light years away.
Beta or Alfirk which means ‘Herd’ varies very slightly between magnitude 3.2 to 3.3 it’s the prototype variable of the beta Cepheid variables, these are very hot and blue stars which vary very slightly over a period of a few hours. In the case of beta it varies every 4.5 hours. Beta is B1 class star with a surface temp of a massive 26,500`C, and is 700 light years away.
Gamma or Errai which means ‘Shepherd’ is 45 light years away. Errai is a K1 giant indicating it is cooler than the Sun, it has a magnitude of 3.2. In around the 4,000 CE gamma will become the North Star.
Delta, which has no name is the famous variable star discovered by John Goodricke in York in 1784. It is the prototype Cepheid type variable which astronomers use today to work out how far away galaxies are. There is something called the period luminosity law. A classical Cepheid's luminosity is directly related to its period of variation. The longer the pulsation period, the more luminous the star. This relationship was discovered by Miss Henrietta Leavitt at Harvard in 1912.
Delta varies between magnitude 3.6 and 4.3 every 5 days and 9 hours. If you can locate delta try to watch it change in brightness as it goes through its cycle. Delta is about 887 light years away, its varies from a F5 supergiant to a G1 supergiant class star, with a surface temp which changes from 5,500’C to 6,800’C during its cycle.
Mu Cepheus the Garnet Star so named by William Herschel because of its striking red tint colour. It’s a M2 class red supergiant with a surface temperature of 3,500’C, mu is 2,800 light years away. Mu is a variable star it varies in brightness erratically between magnitude 3.4 and 5.1. Many different periods have been reported, but they are between either 860 days or 4,400 days. 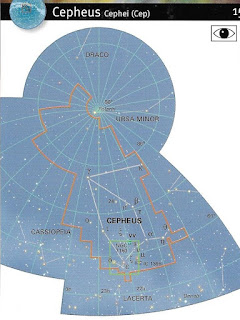