Centaurus The Centuar
A large rich and splendid constellation representing a Centaur who in Greek mythology represented the scholarly centaur Chiron who was then tutor to many of the Greek heroes. He was placed in the sky after accidentality being struck by a poisoned arrow shot by Hercules.
Sadly from Britain hardly any of Centaurus is above the horizon although it is true that from the south coast on a very clear night it might just be possible to see the stars iota and theta but they cannot be seen from the north of England.
Alpha or Rigil Kentaurus which means ‘Foot of the Centaur’ shines with a magnitude of 0.0 is the 4.37 light years from Earth. Alpha is actually composed of three stars A, B, and C. It is one of the finest binary stars in the sky which was discovered in 1689 by Father Richaud at Pondicherry in India. The A component is a G2 class star slightly hotter than the Sun with the B component being K1 class star cooler than the Sun they orbit each other every 80 years.
However it is C component or to give its name Proxima that is the closest star to us being a mere 4.24 light years or around 24,000,000,000,000 million miles away. It takes over 200,000 years to orbit the A and B stars, Scottish astronomer Robert T. A. Innes discovered Proxima in 1915. It is a small red dwarf with planets that orbit the star.
Beta or Agena which means ‘To Be Present’, is a B1 giant star much hotter than the Sun, with a magnitude of 0.6 and lying at a distance of 390 light years.
Gamma of magnitude 2.2 is 130 light years away and is an A1 class star hotter than the Sun.
Eta is 306 light years away and shines at magnitude 2.6 and is a hot B1 class star.
Omega Centauri NGC 5139 is the largest and brightest globular cluster in the sky, it is so bright that it was first catalogued in 150 AD by Ptolemy and it was Bayer in 1603 who gave it the Greek letter omega. It appears as a magnitude 3.7 star. It is 15,800 light years away and has a diameter of 150 light years and contains around 10 million stars. 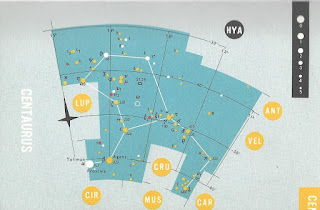