Cassiopeia
One of the most prominent constellations in the northern sky, the main stars forms a distinctive letter W or M in the sky, this depends on which way we view the constellation. It is circumpolar from Britain which means we can see it all year round. In mythology it represents a queen from a land a long time ago who upset Neptune god of the sea.
Cassiopeia can be found by using the pointers from Ursa Major passing a line past the North Star and then continuing to Cassiopeia,. and in any case it is very easy to find.
Cassiopeia and Ursa Major are on different sides of the North Star so when ever Ursa Major is high in the sky Cassiopeia is low down and vice versa.
Alpha Cassiopeiae or Schedar which means ‘Breast’ is a magnitude 2.2 star, it is a KO giant star with a surface temperature of 4250`C compared to 5,800`C for our Sun. Schedar is 230 light years away. During the 19th century it was thought to vary in slightly in brightness but this has not been confirmed in recent times.
Beta Cassiopeiae or Caph which means ‘Palm’ is a magnitude 2.3 star, it is a class F2 giant 55 light years away. Its surface temperature is hotter than the Sun’s.
Gamma Cassiopeiae which has no Arabic name. It’s a BO class star with a surface temperature of an incredible 24,700`C, and lies 550 light years away. It is a variable sta,r its brightness varies between magnitude 1.6 and 3.0. It is the prototype of the Gamma Cassiopeiae type eruptive variable stars. This group is so rare that there are only about 10 examples which are known to exist.
Before 1910 gamma appeared constant at magnitude 2.2 then it made puzzling and unpredictable light variations. In April 1937 it slowly brightened to magnitude 1.6 then decreasing back to magnitude 3.5 in 1940. When at its brightest it is brighter than both alpha and beta. It then slowly brightened again so that by 1954 it was back to magnitude 2.5. By 1976 it had brightened to magnitude 2.2 where it has hovered around ever since, however it is such an unpredictable star that no one knows what it might do next.
Delta Cassiopeiae or Ruchbar which means ‘Knee’ is an A5 class star hotter than the Sun, it is of magnitude 2.7 and is 100 light years away.
Epsilon Cassiopeiae or Segin the meaning of which is unknown, lies 410 light years away. It has a brightness of magnitude 3.4 and is a class B3 star much hotter than the Sun.
Slightly to the right of beta or Caph lies rho a peculiar irregular variable star lying around 3,400 light years away. The light from rho varies between 4.1-6.2, its a yellow hypergiant which varies between a F class and K class star. The star is so big that if it was placed where our Sun is everything out to the planet Mars would be inside it. Its temperature varies between about 5,000` to 7,000` C There are only about 12 known of these hyper giants known in our galaxy. It is believed that this star is on its way to becoming a supernova.
SN 1572
Sometimes called Tycho’s Star this was a Super Nova, this is a star that destroys itself in a massive explosion. It was not discovered by Tycho but he gave the most accurate series of observations on the star, which is why the star bears his name. This supernova would become the most brilliant object in the sky during the last 500 years. It reached around mag -4.
He first saw the star on November 11th 1572. For several weeks it outshone every star in the night sky. It could even be seen in daylight, when the Sun was low in the sky. The star was visible to the naked eye (there were no telescopes at this point) for about 16 months fading from view in March 1574.
At this time of course people believed that the heavens never changed so to see a new star suddenly appear certainly caused a massive amount of interest.
The supernova was between 8,000-9,000 light years away. 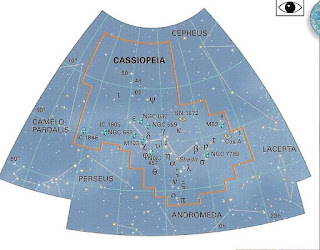