Carina The Keel -Southern Hemisphere
One of the most intriguing of the ancient legends tells how a band of heroes headed by Jason sailed off in search of the Golden Fleece. This fleece had come from a magical ram which was able to fly and which has rescued two royal children from a cruel stepmother, carrying them to the land of king Aetes. After the ram died the fleece was placed in a tree in a scared grove guarded by a particularly nasty dragon. Much to the annoyance of King Aetes Jason managed to kill the dragon and took the fleece back to his own country.
Among the heroes concerned in this expedition were Hercules and the heavenly twins Castor and Pollux. The ship they travelled in was called the Argo and fittingly enough Argo Navis used to be the largest in the sky. I say used to, because it was such an unwieldy constellation that in 1750 the French astronomer Nicolas Louis de Lacaille broke it up into 3 parts, Carina the keel, Puppis the stern and Vela the sails.
Carina is invisible from Britain which is a pity as it contains Canopus the 2nd brightest star in the sky.
Alpha or Canopus which is named after the pilot of the fleet of the Greek Sparta king Menelaos and appropriately enough today Canopus is now used in navigation by spacecraft. At magnitude -0.7 it is the 2nd brightest star in the sky, Canopus is an A9 class giant star with a surface temperature of 6,600 ‘ C compared to the Sun’s 5,800’C.
Beta or Miaplacidus which means ‘Placid Waters’ is a star of magnitude 1.7 it’s an A3 class giant star with a surface temperature of 8,600`C and is 113 light years away.
Epsilon is one of 57 navigation stars that are used by the RAF. It is 610 light years away, epsilon is a K3 giant star and is cooler than our Sun. The star has a magnitude of 1.9 slightly brighter than the North Star.
Theta has a magnitude of 2.8, its a B0 class star indicating it is hotter than the Sun. Theta lies at a distance of 460 light years. it is the brightest star in the open star cluster IC 2602, a cluster with the letters IC stands for Index Catalogue and was published in 1896 as an addition to the NGC or New General Catalogue which was produced in 1888. IC 2602 is known as the southern Pleiades, there are about 75 stars there.
Iota or Aspidiske which means ‘Shield’ has a magnitude of 2.2 and is an A9 class supergiant star much hotter than the Sun, it is 690 Light years away. Due to the wobbling or precession of the Earth Aspidiske will become the South Pole star in 8100 CE.
Eta a very remarkable star, it was recorded by Edmund Halley in 1677 as a star or around magnitude 4.0. During the next 100 years it slowly brightened to about magnitude 2.0 but then it faded again to magnitude 4.0. In 1820 it rose once again to magnitude 2.0, then in April 1843 it suddenly brightened to magnitude -0.8 it outshone every star apart from Sirius. By 1866 it had dropped below naked eye visibility, it is now around magnitude 4.5. So what’s going on?
According to theory eta should have destroyed itself with the massive eruption of 1843 but it didn’t, the theory at the moment is that eta is in the throes of destroying itself in another massive explosion. The majority of astronomers think that eta has one final stage to go through, becoming what is known as a Wolf-Rayet star.
Wolf-Rayet stars represent a final burst of activity before a huge star begins to die. It could be tomorrow or within the next 100,000 years which on the cosmic scale is a blink of the eye. These stars, which are at least 20 times more massive than the Sun, “live fast and die hard”. Their names come from two French astronomers, Charles Wolf and Georges Rayet, who discovered the first known star of this kind in 1867. When eta does explode it will be spectacular!
Eta lies within NGC 3372 or the Carina Nebula, which is sometimes confusingly called the Eta Carina Nebula, its an open cluster containing many other massive O class stars.
NGC 3532 is another bright open cluster appearing as a magnitude 3.0 cluster, it lies at a distance of about 1,300 light years it contains about 150 stars. 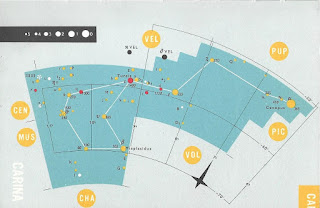