Capricornus the Sea Goat - Autumn Sky
Low down on early autumn evenings is one of the constellations of the zodiac, Capricornus is depicted as a goat with the tail of a fish. Although a very faint group it has one of the oldest mythological associations. Capricornus is also sometimes identified as Pan, the god with a goat's head, who saved himself from the monster Typhon by giving himself a fish's tail and diving into a river.
The brightest star is Delta Capricorn or Deneb Algedi which means the ‘Goats Tail’ with a magnitude of 2.8, its 39 light years from Earth. It is an A7 giant star hotter than our Sun.
The next brightest star is beta or Dabih which means `Lucky One of the Slaughterers` it is magnitude 3.1 star and is 328 light years away. It is K0 giant indicating it is cooler than the Sun.
The third brightest star is alpha which should of course be the brightest but as we have already discovered many times as we look at the constellations it doe not always work out that way. Alpha or Al Giedi which means the ‘Forehead’ is actually the third brightest, it is also a double star, meaning that if you look very carefully you will see two stars. In this case the two stars are not connected in a binary system they are what astronomers call an optical double.
Alpha 1 is a magnitude 4.2 star at a distance of 870 light years and is a G3 supergiant slightly cooler than our Sun while alpha 2 is a magnitude 3.6 star at a distance of only 102 light yeas it is a G8 giant star.
Just to the right of delta is gamma or Nashira which means the ‘Fortunate One’, it lies at a distance of 139 light years away and has a magnitude of 3.7 and is a K0 class star being cooler than the Sun. 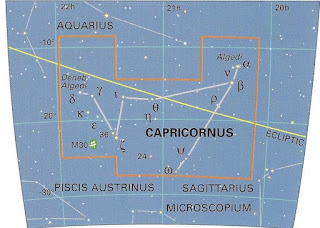