Canis Minor the Lesser Dog – winter sky
In mythology it is the smaller of the dogs that follows Orion the Hunter.
It has only one bright star alpha or Procyon which means ‘Before the Dog’, this is because it rises before Sirius. Procyon is the 8th brightest star in the sky with a magnitude of 0.3. It is close to the Earth being only 11.5 light years away. It is an F5 class star meaning its slightly hotter than our Sun.
Procyon forms a very prominent and large triangle with Sirius in Canis Major and Betelgeuse in Orion.
By a remarkable coincidence both of the dog stars are accompanied by white dwarfs. The pup orbiting Sirius was discovered by Alvan Clark in 1862 when he was testing a new telescope. The white dwarf orbiting Procyon was discovered in 1896 at the Lick observatory using the 36 inch refractor.
White dwarfs are the remains of a star that has used up all its hydrogen fuel and what remains is mostly helium, this makes them super dense objects with a tea spoon weighing many tons.
The only other notable star is beta or Gomeisa which means the ‘Bleary Eyed One’ It is of magnitude 2.9 and is 160 light years away, its a B8 class star which means it is hotter than the sun.
Just above beta is the faint star gamma which has a magnitude of 4.3 and is a K3 giant class star which is cooler than our Sun, gamma is 320 light years distant. 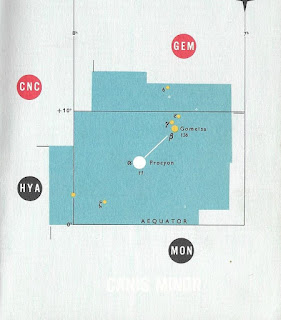