Canes Venatici the hunting - Northern Hemisphere
This constellation was added to the sky by the Polish astronomer Johannes Hevelius who was not only an astronomer but the major of Danzig. Hevelius invented 10 new constellation in the northern sky, astronomers today still use seven of them. It was in 1687, that Canes Venatici or the hunting dogs were created. According to myth the hunting dogs were being held by the Herdsman Bootes and it is suggested that this may be to prevent them from chasing the two bears around the celestial pole.
Before Hevelius this area of sky was part of Ursa Major The Great Bear, there are only two stars of note they used to be known as Asterion or the northern dog and Chara or the southern dog, these 2 will become alpha and beta Canes Venatici.
Alpha or Cor Caroli which means ‘Charles Heart’ and there is some confusion as to who this refers to. Some references says it honours Charles I, while other sources suggest that it shone particularly brightly in 1660 on the arrival of Charles II and the restoration of the monarchy.
You can find Cor Caroli below the tail of the Great Bear it is a fairly bright star, and is an A class indicating it is hotter than the Sun with a magnitude of 2.8 and is 115 light years away.
Beta or Chara which means the ‘Southern Dog is a G0 class star just slightly hotter than the Sun. It has a brightness of magnitude 4.2, and is 27 light-years distant from the Sun. 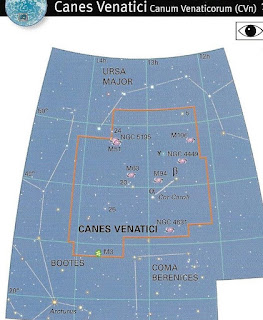