Cancer the Crab – Northern Hemisphere
The area between the stars Castor and Pollux in Gemini and Regulus in Leo the Lion appears very dull and featureless. It is occupied by Cancer the celestial crab. All of these three groups are part of the zodiac.
Cancer is one of the oldest constellations dating back over 4,000 years, it represents a crab which Juno queen of Olympus sent to rescue the multi headed monster the Hydra which was doing battle with Hercules. Hercules just trod on the crab and squashed it. However as a reward for its efforts Juno placed it in the sky.
In form Cancer resembles a very dim and ghostly looking Orion.
Cancer is the only constellation in the sky to have a nebula or cluster that is brighter than any of its stars. This is M44 or Praesepe the beehive which is an an easy naked eye object.
In the 1760s and 1770s a French astronomer Charles Messier was looking for comets, however he kept discovering fuzzy looking objects in the sky, faint comets can sometimes look like this. To avoid confusion Messier drew up a list of 110 non comet objects. History can sometimes be cruel because the dozen or so comets that Messier discovered were all faint and unremarkable, however the list he drew up is still used today by astronomers and this is how this French comet hunting astronomer is remembered. This is the Messier List. In Cancer we have M44 which is number 44 on the Messier list. To see many of the Messier objects you will need either a pair of binoculars or a telescope.
M44 is an open cluster about 577 light years away and has a magnitude of 3.1 it is the brightest object visible in cancer. M44 contains around 1,000 stars. If you remember an open cluster is a group of young stars that are held together gravitationally but will over a period of millions of years drift apart.
One last thing to mention about this cluster is that sometimes it is referred to as ‘The Manger’ there are two faint stars near the Manger the one above is called Asselus Borealis the northern donkey the one below Asseslus Australis the southern donkey. Could there be a biblical connection here?
I can’t resist mentioning that Assellus Australis also holds a record for the longest name of a star, Arkushanangarushashutu, derived from ancient Babylonian language, which translates to ‘the south-east star in the Crab’.
The brightest star is beta or Al Tarf which means ‘End or Edge’ . At magnitude 3.5 it is a K4 giant star and is 290 light years away. 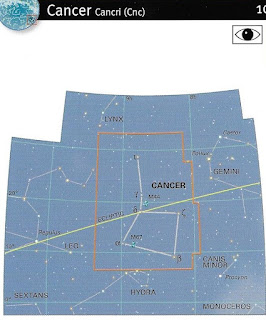