Camelopardalis the Giraffe – Circumpolar Northern Hemisphere
Camelopardalis the Giraffe is without doubt one of the dullest of the northern constellations. It was first created by the Dutch astronomer Petrus Plancius around 1613.
Although the 18th largest constellation in the sky it has only one star that you might glimpse with the naked eye.
Beta is the brightest star in Camelopardalis at magnitude 4.0 Its a G1 supergiant 870 light years away.
Broadly speaking Camelopardalis fills the area of space between Capella in Auriga, Polaris the North Star and Cassiopeia. It has been said that if you come across an area of sky with nothing in it, you have located the Giraffe! 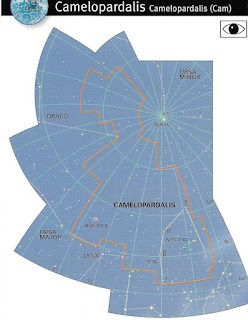