Caelum the Chiesel - winter sky
This is one of the 14 obscure constellations created by Nicolas Louis de La Caille. It was first seen in his catalogue of 1763.
There are no stars brighter than magnitude 4.0 and the four faint stars that do form Caelum could easily have been incorporated into the constellation of Eridanus the River.
The constellation is low in the winter sky below Orion. I have never been able to see any stars in this constellation even when observing from the south of England. I suppose if the sky was at its best and you knew exactly where you were looking you might just glimpse Caelum, but it is really not worth the effort.
Even astronomers in the southern hemisphere would hardly give the area a second glance. There are not even any clusters or galaxies worth looking for in Caelum. 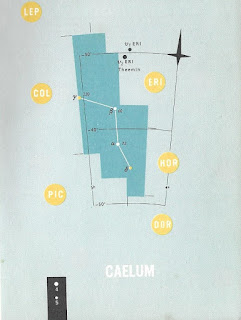