The Astrognome A-Z Guide to the Constellations - Introduction

Starting tomorrow I will take you on my A-Z of the constellations, but first here is hopefully a simple introduction to the stars we see in the sky.

There appears to be millions of the stars in the sky around us on a clear night, surprisingly on a good clear night it is possible to see not millions but around 3,000 stars from from any one place on the Earth. They appear to be randomly spread around the sky but they are grouped together in 88 patterns or constellations which tell the stories from ancient mythology. In the west we tend to use the stories from ancient Greece, but while the constellations are Greek most of the star names we use are Arabic, which is why they can sometimes seem a little bit different to us.

Some stars we can see all year round while some we can only see in certain seasons. We know the Earth takes a year to go once around the Sun and we only see the stars at night time. But the stars are in the sky in the day time as well, we can’t see them because the Sun is simply too bright. This means that if it is summer we see the summer stars in the night sky while at the same time in the day sky there would be the stars that we would see in winter in 6 months time. Which ever of the 4 seasons we are in, the opposite season stars are in the day sky.

I mentioned that we can see some stars throughout the year, this is because we need to think of the Earth in space in a 3 dimensional way (sorry I don’t want to go into heavy astronomy) however where ever the Earth is in its yearly orbit around the Sun there will be stars above and below us that will never set, these stars are called Circumpolar Stars and this applies to both the northern and southern hemispheres. The most famous of the northern circumpolar groups of stars is the Plough or as the Americans like to call it the Big Dipper.

This is a simple guide to the 88 constellations in the night sky which can be seen without using telescopes or binoculars. It always seems daunting at first to navigate around the night sky but once you are able to find certain signposts in the sky it becomes relatively simple. There are so many star maps that can be downloaded on to mobile phones, i pads or laptops that can act as an aid to navigating around the sky.

Here are the 88 constellations.


The 88 constellations are made up of 48 that date back to the times of the Greek astronomers 2,500 years ago and are found in the northern hemisphere while the other 40 are considered ‘modern’ in that they were mostly created in the 16th and 17th centuries when explorers travelled to the southern hemisphere and saw stars that no one knew about and then designed ‘new’ constellations. These often depicted new scientific instruments such as the telescope and microscope. Unfortunately many of these groups are very faint and obscure. In the northern hemisphere astronomers tried to fill gaps between the original constellations, again many of these ‘modern’ constellations are faint and obscure and many hardly warrant a mention.

The brightness of stars are measured using a magnitude scale and rather confusingly the lower the number the bright the star. A star of magnitude 1 is much brighter than a star of magnitude 6, which are the faintest stars that can be seen with the naked eye under the very best of conditions. In towns and cities magnitude 4 is usually the best that can be seen due to light pollution. Stars which have a minus number are the very brightest stars. The brightest star we see in the night sky is Sirius the Dog Star at magnitude -1.44 it is a winter star and is in the constellation of Canis Major the Large Dog.

The 24 brightest stars of each constellation is allocated a letter from the Greek alphabet, this system was introduced in 1603 by the German astronomer Johann Bayer. In theory the brightest star in a constellation will be alpha then beta until omega, but sadly it does not always work that way!! Astronomers use the lower case to identify the stars rather than capital letters.


The colours of stars tell astronomers which ones are hotter or cooler in nature. Stars that are blue or white in colour are much hotter than red stars. Our Sun being yellow is about mid range. This does seem strange when we say that things can become red hot, but if you look at a flame the red or orange part is around the edge while in the middle the colour is bluish, the hottest part of the flame. And while stars don’t burn like fire the colours are produced by atomic reactions the colour theme is the same as a flame. 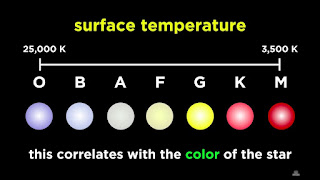