Astronomy in Yorkshire # 9 The Astronomical Clock in York Minster

The York Minster Astronomical Clock was installed in 1955, it was designed by Robert d’Escourt Atkinson.

He was born on April 11th 1898 near Rhyader in North Wales . The family moved to Manchester and when he was 12 he won a foundation scholarship to Manchester Grammar School.

During World war 1 he served with the Royal field Artillery in Italy. Between the wars he became interested in nuclear physics but rather than working in that field in 1937 he took up the position of chief assistant at Greenwich, he worked here until 1964. In 1940 he was seconded to the Royal Navy where he worked in the eastern Mediterranean.

On returning to Greenwich in 1946 he began studying how to accurately measure the position of stars. In this he worked on the Cooke Transit Circle that had been installed in 1933.

In 1955 die to his mechanical prowess he was asked to design the magnificent astronomical clock in York Minster. The clock is a memorial to RAF aircrew operating from Yorkshire, Durham and Northumberland during World War 2.

Atkinson based the design of a pilot’s view of the Sun and certain navigational stars over York that would be seen when flying south. 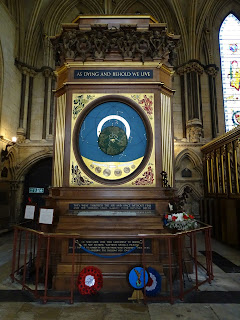