On the night of April 21st Mr C L Brook of Meltham near Huddersfield counted between 40 – 50 meteors including a number of Lyrids.

But the most interesting meteor observed at many stations including Meltham was that of a bright Cassiopeid which came into view at 11hr 22m. Its radiant point was near delta Cassiopeia and it descended from 66 to 44 miles over a path of 55 miles. It is remarkable that slow moving fireballs often take their flights from this radiant near delta Cassiopeia in the spring months of April and May.

Fireballs had been seen on April 2nd 1891, April 9th 1876, April 10th 1874, April 15th 1893 and May 30th 1877. There were various meteor catalogues from observers containing other brilliant instances of bright slow moving April meteors from the same radiant in Cassiopeia. 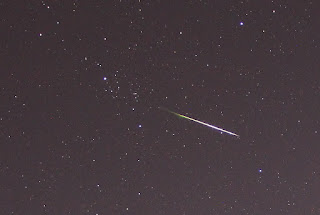