Born in London his father was an optician and philosophical instrument maker. The family moved to Liverpool in 1818 and when his father died in 1835 J B Dancer carried on the business.

Sometime afterwards he moved to Manchester where he became well known for his improvership of philosophical instruments. Among these ideas was one for photographic slides for the magic lantern which apparently was first suggested by Dancer.

With regards to the microscope he was instrumental in making Manchester one of the important centres in the country.

In later life his eyesight failed and this caused his business to fail, and it was sad to report that someone who had rendered so much to the study of optics ended his days in such a poor way. He died in 1887

I have come across a series of references from the Sheffield Daily Telegraph during August 1879 when he was selling 2 astronomical telescopes and an observatory. I don’t know if they were his or if he was selling them for someone else. The advert says for more details J B Dancer,  Optician, 43 Cross Street, Manchester 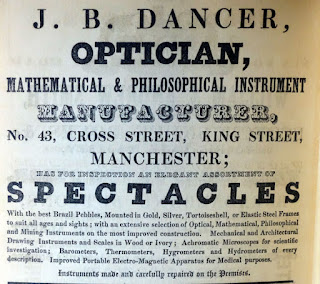