Aquarius – The Water Bearer - Autumn Sky
Aquarius is one of the most ancient of constellations. The Babylonians saw this area of sky as a man pouring water from a jar and it is still represented this way today. Aquarius is one of the zodiacal constellations and according to the Greeks it is linked to Ganymede, cup bearer to the Olympic gods.
It’s in the Zodiac a belt of stars made up of 12 constellations that stretch around the sky, actually there are 13 constellations in the Zodiac, no one ever talks about Ophiuchus. The zodiac is where the Sun, Moon and planets will always be found in the sky. Many people get confused with astronomy and astrology, astronomy is the science of the stars while astrology is the pseudo science that tries to link people’s characteristics with the positions of the planets against the starry background.
Aquarius is not a particularly bright constellation and can be found below the square of Pegasus. The most prominent part of the constellation is the Y shaped figure of 4 stars representing the water jar itself centred on the star zeta. Together with gamma, eta and pi this little area is often called the ‘Water Jar’.
The brightest star is beta whose name is Sadalsuud which means ‘luck of lucks’ is of mag 2.8 and is about 520 light years away. It is a G0 supergiant At 5,400`C it is slightly cooler than the sun.
The second brightest star is alpha at mag 2.9 is a G class supergiant class star, however this is a G2 type star, slightly cooler than the Sun it has a proper name which is sadalmelik which means ‘luck of the king’. Alpha is about 540 light years away. It has a surface temperature of around 4,900`C.
Delta or Skat which means ‘leg or shin’ is the third brightest star at magnitude 3.3 and about 113 light years away. It is an A3 star with a surface temperature of about 8, 700`C much hotter than the Sun.
The following stars make up the water jar
Gamma or Sadachbia, its name means ‘luck of the homes’ (tents).has an apparent visual magnitude of 3.8 and is 164 light years distant. It is an A0 class star with a surface temperature of about 10,200`C, our Sun is about 5,800’C
Zeta which is slightly above and to the left of gamma is an unnamed and  is a binary star, which means there are two stars here, however without a small telescope you would not be able to see the two stars. Zeta is located at the centre of the water jar asterism. The two stars are yellow white type stars one is a F3 star at magnitude 4.2 the other a F6 giant at magnitude 4.5 . Both are hotter than the Sun . The pair are 92 light years away and when we put the brightness of the two stars together they appear in the sky as a single star to the naked eye as a star of magnitude 3.6.
To the left of zeta is eta is a star of magnitude 4.0 and is 168 light years away, It is a B9 class star with a surface temperature of 11,000 degrees ‘ C twice the temperature of the Sun.
Just to the right of zeta is pi the faintest of the water jar group of stars at magnitude 4.6, it is a B1 giant star with a temperature of 26,700’ C. Pi is 780 light years away. 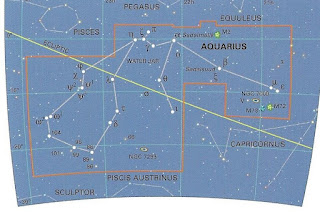