Astrognome A-Z of Constellations # 3 Apus the Bird of Paradise

Apus - the Bird of Paradise - Circumpolar southern hemisphere
Another small faint constellation and a constellation that is not visible for Britain. Apus the bird of paradise was introduced to the sky in the 1590s by the Dutch astronomer and cartographer Petrus Plancius from the observations of Dutch navigators Pieter Keyser and Frederick Houtman, when they voyaged to the southern hemisphere. and first catalogued by Plancius in the late 16th century.
The name of the constellation is derived from the Greek word apous, which means “footless.” (Birds of paradise were at one point in history believed to lack feet). The Greater Bird of Paradise known in India had a magnificent white, yellow and red plumage but unsightly legs, which were cut off by the natives desiring to offer the white man only the attractive part of the bird. There are no myths associated with the constellation.
It is located near the south pole star, there are no bright stars in Apus, the brightest are αlpha Apodis has a visual magnitude of 3.8, it is a K class giant star which is cooler than our Sun. Alpha Apodis is approximately 410 light years distant.
The second brightest star, Gamma Apodis has a visual magnitude of 3.9. It is a yellow G-type giant star slightly cooler than the Sun, it is approximately 160 light years distant.
Here is an example where the brightest stars do not follow the order of the Greek alphabet, with beta at magnitude 4.2 being fainter than gamma. 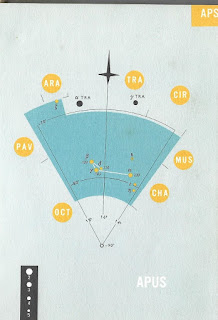