Antlia the Air Pump – Spring Sky
The French astronomer Abbe Nicolaus de la Caille (1713-1762) is frequently encountered in connection with certain constellations in the southern sky. He travelled to the Cape of Good Hope in 1750 to chart the southern heavens and in 1763 produced a catalogue of over 10,000 stars which was published posthumously. In this list of stars he introduced 14 new constellations to the sky, sadly they are all faint and obscure groups and many of them represent what were at the time modern instruments. Hence the air pump rather than a classical Greek term.
There was originally 48 constellations the number has now increased to 88 many of these modern constellations are made up of faint stars just to fill in the gaps between the main constellations. Many do have modern sounding names.
The air pump was created to honour Robert Boyle’s invention of the air pump around 1660.
Antlia can be seen very low in the sky during spring evenings however there are no bright stars in the constellation, you would need a very clear southern horizon and a very clear sky to be in with a chance of seeing any stars in Antlia.
The brightest alpha is at mag 4.2 and has a spectrum of K4 giant star its surface temperature is around 3,800 degrees much cooler than our Sun and lies about 370 light years away. Even from the southern hemisphere where is is naturally much higher in the sky there is little to remark about Antlia. 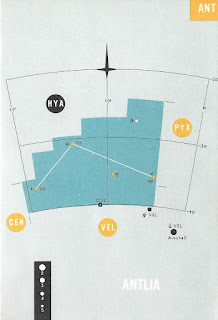