On January 11th 1787 William Herschel discovered not one but two new moons orbiting Uranus.
The largest of the moons of Uranus is called Titania it is 981 miles in diameter. Titania is named after the queen of the fairies in Shakespeare's A Midsummer Night's Dream. 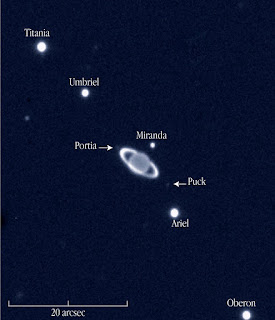 Oberon is much smaller and is the furthest out of the larger moons of Uranus and is named after   the King of the Fairies in A Midsummer Night's Dream.

Their names were in fact suggested by William Herschel’s son John in 1852.