An asteroid came within half the distance from Earth to the Moon, scientists at the Catalina Sky Survey discovered the asteroid, which is being called asteroid 2017 AG13, on Saturday 7th January. 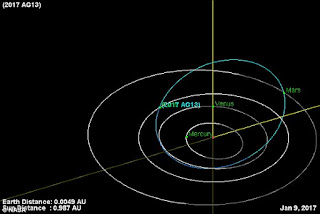 The asteroid was between 50-111 feet across and was moving at about 10 miles (16 kilometers) per second, which was the same size as the asteroid that hit Russia in 2013. The size of the asteroid coupled with how fast it was moving and its low albedo (brightness) made it difficult to view through a telescope.

Asteroid 2017 AH13 is particularly interesting to astronomers because of its proximity to Earth in a group called the Aten Asteroids. This asteroid is following an elliptical orbit versus the usual circular orbit, and crosses through the orbits of both Venus and Earth.