Sometimes called Tycho’s Star this was a Super Nova, this is a star that destroys itself in a massive explosion. It was not discovered by Tycho but he gave the most accurate series of observations on the star, which is why the star bears his name.  This supernova would become the most brilliant object in the sky during the last 500 years.

He first saw the star on November 11th 1572. For several weeks it outshone every star in the night sky. It could even be seen in daylight, when the Sun was low in the sky. It was about -4.5 making slightly brighter than Venus.

At this time of course people believed that the heavens never changed so to see a new star suddenly appear certainly caused a massive amount of interest. 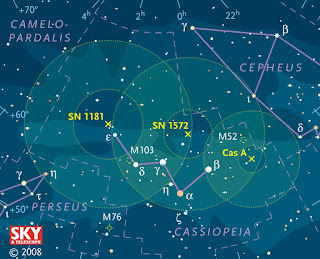 The star was visible to the naked eye (there were no telescopes at this point) for about 16 months fading from view in March 1574.

Tycho Brahe 1546-1601 was the last of the great pre telescopic astronomers.