Mariner 10 was launched on November 3rd 1973 and would go onto become the first space craft to visit the planet Mercury. It was the last of the Mariner series; Mariner 9 had successfully imaged Mars while Mariners 11 and 12 would be converted to become Voyager 1 and 2.

Although Mariner 10 flew past Venus and made scientific studies there it is usually associated with Mercury. It was not the first space craft to visit Venus there had already been several; in fact the first was the earlier Mariner 2 in 1962.

Mariner 10 performed its first fly past of Mercury on March 29th 1974. Mariner 10 would make scientific studies and photographed around 45% of the surface of Mercury. 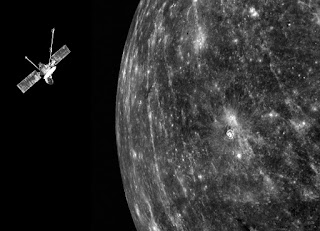 Its mission ended in 1975 when its fuel ran out. It is assumed to still be orbiting the Sun today.