On October 12th, 1964, the USSR continued its pioneering conquest of space orbiting the first multi-member crew on board the Voskhod ("sunrise") spacecraft. 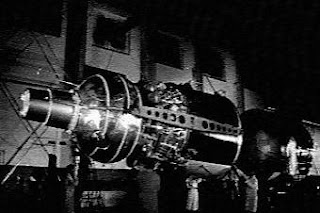 This was the seventh manned Soviet space flight. It was the first space flight to carry crewman into orbit, without the use of spacesuits, and the first to carry either an engineer or a physician into outer space. It also set a manned spacecraft altitude record of 336 km (209 mi).

The three cosmonauts Vladimir Komarov, Konstantin Feoktistov, and Boris Yegorov had no space suits in Voskhod 1 because there was neither the room nor the payload capacity for the Voskhod to carry them. The original Voskhod had been designed to carry two cosmonauts, but Soviet politicians pushed the Soviet space program into squeezing three cosmonauts into Voskhod 1.