On October 11th 1527 a comet was seen from Vuestrie in Upper Alsace, which was visible for a prolonged period of time. Its effect was so frightening and memorable that more than a century later people continued to write about it. 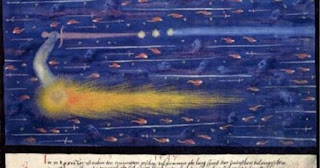 It was reported as being very long and yellow-red, similar to a mingled colour of blood. At the front the head like a bent arm, as if it had a sword in its hand and wanted to strike. And at the point of the sword there were three big stars and from the stars sprang a cloud-coloured stream, which was longer than the comet’s tail.