It was 1914; World War 1 was in its first year when an event occurred at Appleby Bridge near Wigan in Lancashire, England, a visitor from outer space,  a meteor crashed to the ground. 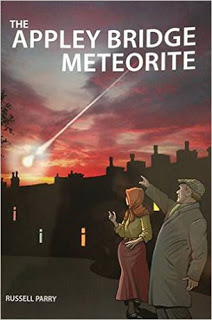 It was the evening of Tuesday 13th October 1914 around 8.45 pm when local residents heard a thunderous detonation and saw a sudden and spectacular brightening of the night sky.

Many may have thought it was some kind of secret enemy weapon coming towards them from a Zeppelin airship. It was nothing whatsoever to do with the enemy but a meteorite. 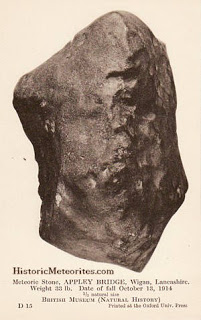 On the following day an unusual stone was found embedded into the ground at Halliwell Farm. It was a Chondrite meteorite. It weighed 33 pounds (15 Kg) and was covered in a burnt powder with an interior of light grey spots of gold and metal.