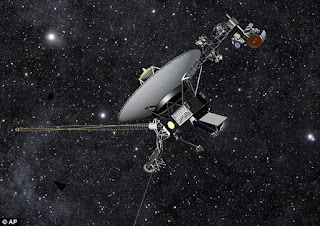 Voyager 1 flew past the gas giants Jupiter and Saturn and sent back incredible images and information that scientists are still studying today. Amongst the many discoveries made by Voyager 1 was that the moon Io had active volcanoes, it was the first object other than the Earth for this to be seen happening. Io was one of the moons that was discovered by Galileo in the winter of 1609/10. 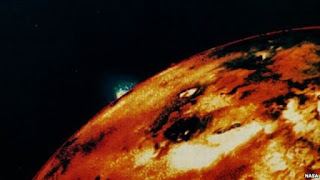 When the probe flew past Saturn and sent back incredible images if the ring system it also examined Titan the largest moon of Saturn. Although it was not possible to see the surface of Titan due to the thick atmosphere there was an indication that there was liquid on the surface. The Cassini mission has indeed conformed that there is liquid on Titan, not water of course but methane.