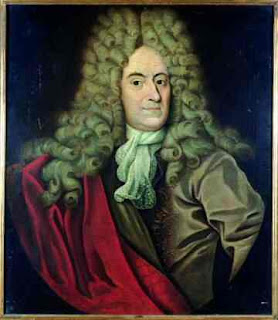 He was born on September 25, 1644, in Århus, Denmark, little is known of his early life, however he was invited to join the observatory at Uraniborg to  work on observations made by Tycho Brahe from 1664-1670.

In 1671 over a period of several months, Jean Picard and Rømer observed about 140 eclipses of Jupiter's moon Io, while in Paris Giovanni Domenico Cassini observed the same eclipses. By comparing the times of the eclipses, the difference in the longitudes of Paris and Uraniborg was calculated.

Rømer noticed upon examination of the data that he collected along with the observations of Cassini that the times at which the satellite Io emerges from the shadow of Jupiter in each of its revolutions about the planet are continually lengthened as the earth recedes from Jupiter, while in a similar but reverse manner, the times between emergences are shortened as the earth approaches Jupiter. 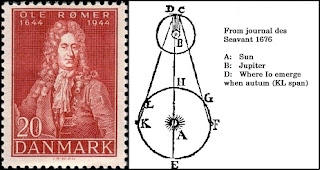 Rømer did not actually calculate the speed of light from his observations. At the time, the distance between the sun and the earth was still only a roughly calculated quantity, while the earth's elliptical path around the sun meant that the distances between the earth and Jupiter did not accrue uniformly, but varied in a complex manner according to the time of year and the position of the earth in its orbit. It would be left to later investigators to pin down an actual speed of light based on these phenomena.


In his Mathematical Principles of Natural Philosophy (1713), Isaac Newton credits Rømer as the first to observe the velocity of light through observations of Jupiter's moons.