On September 14th Luna 2 became the spacecraft to reach the surface of the Moon and the first man made object to land on another celestial body. It was the second Russian space craft sent to the Moon.  An earlier probe Luna 1 had bypassed the Moon. Luna 2 was not designed to soft land on the Moon rather to impact it. The technology needed to perform this task had not yet been devised. The probe was designed to send information back to Earth right up until the moment of impact.  Luna 2 crashed into Mare Imbrium the Sea of Showers or Sea of Rains. 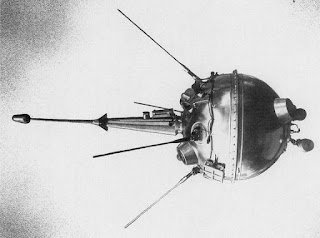 There were no cameras on the space craft but a number of experiments on board which sent back valuable information to scientists that would help in planning future missions to the Moon.

Although Luna 2 was a huge success for the Soviets it also helped the U.S. by starting a trend of crash landing. It would eventually lead to the U.S.-made Rangers which would go on to also crash land on the moon in exactly the same way and help pave the way for the manned Apollo missions.