In October 1582 the new Gregorian calendar was introduced by Pope Gregory XIII, it replaced the Julian calendar introduced by Julius Caesar to make the calendar more accurate. Most Catholic countries in Europe followed suit but protestant countries like England did not introduce it until 1752. 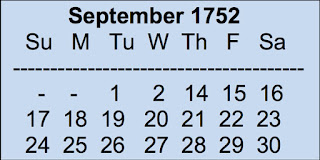 Some reports say that there were riots in the country when people realised that they were going to lose 11 days!!