Halley’s Comet 684 AD comet Halley was sighted on September 6th 684 Ad in the west, it had a tail 10 degree long.  The Chinese described it as a broom star. After 49 days it went out of sight. It was recorded by Chinese and also by Japanese astronomers. 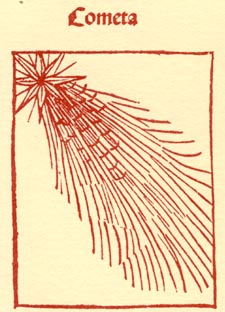 The comet was also reported in the west it was reported in Italy and this recorded was found in the Nuremberg Chronicles which was an illustrated story of human history related to the bible.

Halley’s Comet returns to the Sun about every 76 years. It will return again in 2061.