On August 30th 1992 astronomers David Jewitt and Jane Luu discovered the first Trans Neptunium object. It was the first of the Kuiper belt objects that had been predicted by Gerald Kuiper back in the late 1940s. 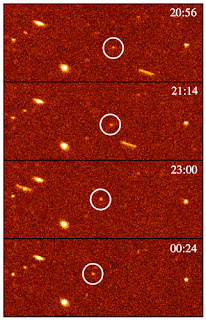 Although we take these Kuiper belt object discoveries for granted today with over 1500 now having been discovered including Eris which caused Pluto to be demoted to a dwarf planet in 2006 none were known before 1992. QB1 is not very big being only around 125 km across, and takes nearly 290 years to orbit the Sun once.

It was suggested that the object be called smiley because the book Smileys People was being read at the time in the observatory at Mauna Kea in Hawaii, but because there was already an asteroid called smiley that never happened. Today the object is just known as QB1.