Pierre Mechain was born in Laon France on August 16th 1744, he was the born the son of a master ceiling plasterer but quickly in life showed an interest in mathematics. He turned to astronomy and in 1782 his work with comets won him admission to the Academies Royales des Sciences. 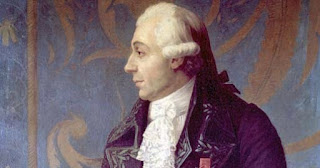 He discovered 11 comets and calculated the orbits of these comets plus other known comets.

In addition Mechain discovered many nebulae that would be incorporated by Charles Messier into his famous catalogue of galaxies and nebulae.