The nova when discovered was of the 3rd magnitude but would reach a magnitude of 1.8 the following day nearly as bright as Deneb one of the stars of the summer triangle which has a magnitude of 1.3. The nova was only about 5 degrees from Deneb and for a short period of time changed the appearance of the constellation of Cygnus. 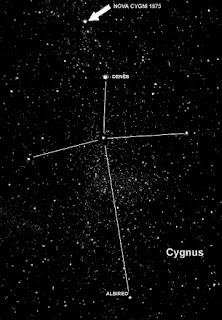 The nova was visible to the naked eye for about a week before it faded from view and optical aid was needed to see it and was about 6,300 light years away and originally would have been below about magnitude 19, meaning that the star had increased in brightness by about 40 million times.

Nova Cyg was the second brightest nova of the 20th century with only CP Puppis in 1942 being brighter.

The term Nova comes from the Latin for New, a few hundred years ago when astronomers saw what we call Nova they thought they were new stars being created. A nova is a binary system where two stars orbit each other. Typically one will be a white dwarf, and the other a red giant, the white dwarf has a strong gravitational field and pulls gas from the larger though less massive red giant. When some of this less dense and cooler gas falls onto the hot surface of the white dwarf it is thrown off into space, the star will become brighter for a period of time before returning its normally brightness. This process can happen more than once. 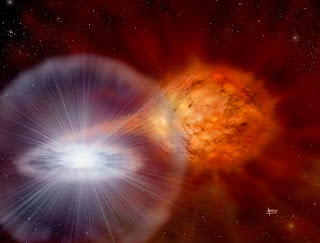 At the time of its discovery it was simply referred to as Nova Cygni 1975, today it has the designation nova V1500 Cyg, which means it was the 1500 variable star to have been discovered in the constellation of Cygnus.