A bright meteor was seen over the UK on August 18th 1783, the meteor appeared to enter the Earth’s atmosphere over the North Sea passing over the east coast of Scotland then over England and finally broke up over south west France or northern Italy a distance of over 1,000 miles.

A letter from Nathaniel Pigott the father of Edward Pigott one of the fathers of variable star astronomy was published by the Royal society. 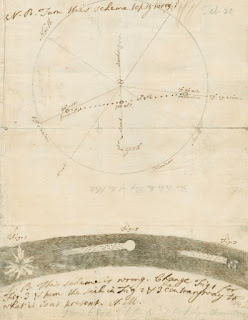 Pigott was riding his horse with two other gentlemen from York to the east riding of Yorkshire when around 10.00 pm while at Heworth Common near York there attention was drawn towards the West North west by several faint flashes of lightning. Pigott then noticed some luminous matter in motion and collecting together from different directions took firs and presented itself in the form of a ball. It was vivid bright and the whole horizon was illuminated so much that small objects on the ground could be seen.

The interval of time from the meteor’s formations’ to its extinction was nearly 20 seconds. Pigott adds that his long habit he has of counting seconds in astronomical observations induces him to think this observation and timing  can be relied upon.