Max Wolf was born in Heidelberg, Germany on June 21 1863 and would become a pioneer in astrophotography. 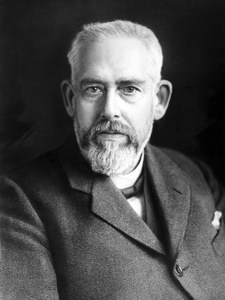 In 1910 Wolf proposed to the Carl Zeiss optics firm the creation of a new instrument, now known as the planetarium.

Wolf co-discovered several comets and also co-discovered four supernovae, working with E E Barneard,  Max Wolf proved that dark nebulae of the sky that astronomers believed to be ‘holes in the sky’ were huge clouds of fine opaque dust.

Wolf applied astrophotography to the observation of stars. In 1919 Wolf published a catalogue of the locations of over 1500 nearby stars.  These stars are still commonly identified by his name and catalogue number. Among the stars he discovered is Wolf 359, a dim red dwarf that was later found to be one of the nearest stars to our solar system.  This catalogue is still used by astronomers for astronomical research to this day.