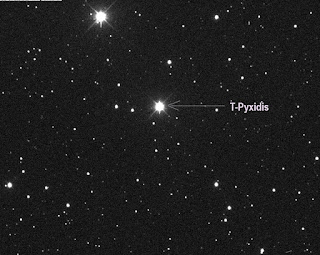 Novae are binary systems with two stars orbiting each other, one star which will be cooler than the other has gas pulled off the other hotter star and forms a disc around it, when too much gas is orbiting the second star it this cooler gas falls onto the hotter star and in simple terms the star will sizzle and throw about 0.1% of its mass into space abd cause the star to become brighter.
Posted by Astrognome at 00:05