On April 20th 1786 John Goodricke died. He was not quite 22. He was one of the ‘Fathers of Variable Star Astronomy’ when from 1781-1786 working with Edward Pigott he made York in England one of the astronomical centres of the world. He explained the variations of Beta Perseus known by its name as Algol. He suggested that there were two objects eclipsing each other.

He discovered the variable star Delta Cepheus which astronomers use today to work out how far away galaxies are from Earth.

In addition he also discovered the variable star Beta Lyra 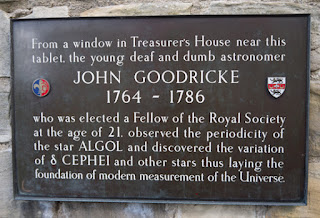 .
All this he achieved as well as being deaf and unable to speak. There was clearly nothing wrong with his thinking processes.