The High Possil meteorite was one of a number of falls around the beginning of the 19th Century, which were witnessed, recovered and investigated thoroughly. 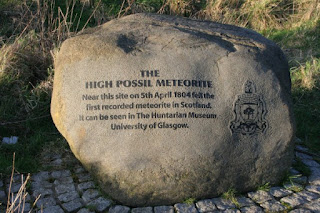 High Possil is a stony meteorite, classified as an L6 ordinary chondrite - a very common type. The largest surviving piece is at the Hunterian Museum and weighs about 151g.

The High Possil fall could perhaps be said to mark the beginning of modern meteorite science.
Posted by Astrognome at 06:10