Amy Johnson, born in 1903 in Hull in the East Riding of Yorkshire before the first flight of an aeroplane was a pioneering English aviator; she was the first female pilot to fly alone from Britain to Australia. She flew in the Second World War as a part of the Air Transport Auxiliary and died during a ferry flight. 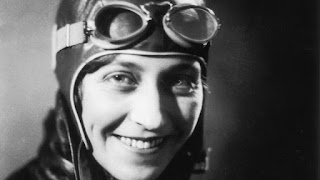 On January 5th 1941 a frosty and foggy day she took off from Blackpool airport to ferry an Airspeed Oxford, a twin engine training aircraft to take it to an airbase near Oxford.

She never made it. What happened next is unsure; the wreckage of her aircraft was found in the river Thames about 4 ½ hours after take. It is not clear if she got lost in bad weather and crashed or that she was shot down by friendly fire. Her body was never found.

This mystery remains today.
Posted by Astrognome at 11:10