The Great Daylight Comet of 1910

It's unclear who discovered this interloper, though the first to spot it might have been diamond miners in South Africa returning to the surface before dawn on January 12th.

By the 17th January it was possible to see the comet in the daytime sky. At its brightest the comet was much brighter than the planet Venus. Although discovered in the southern hemisphere people in the northern hemisphere would have wonderful views of the comet later in the month. 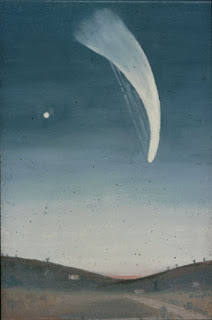 Strange to report this great comet appeared just a few months before Halley`s comet and many people believed that it was Halley that they were watching!
Posted by Astrognome at 05:14