Duncan Liddel was born in Aberdeen in 1561 and died there on 17 December 1613. He lectured on Ptolemaic, Copernican and Tychonic cosmological systems. After receiving his early education in Aberdeen, Liddel departed for the Continent in 1579, where at the University of Frankfurt-an-der-Oder he studied mathematics, philosophy and medicine. When an epidemic struck Frankfurt in 1585, Liddel moved on to the University of Rostock. 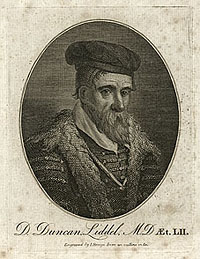 In Rostock he was befriended by several eminent men including the astronomer and professor of medicine Henrich Brucaeus, It was probably due to Brucaeus that Liddel met the great astronomer Tycho Brahe, whom he visited at least twice at his observatory in Denmark in June 1587 and June 1588.
Posted by Astrognome at 07:13