The Venera 9 space craft was the first space craft to send back a picture from the surface of another planet. The Russian mission to Venus was launched on June 8th 1975 and arrived at Venus on October 20th 1975. The mission was in two parts the orbiter and lander. The orbiter mission lasted until December 25th 1975. 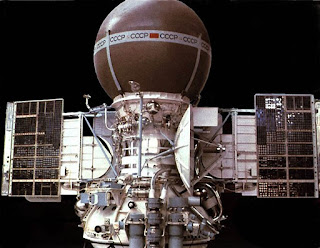 The Venera 9 lander touched down on the surface of Venus on October 22nd 1975 at the base of a hill near Beta Regio. The lander measured the surface temperature of Venus at +460 degrees  Centigrade with an atmospheric pressure 90 times that of the Earth. The single black and white picture showed a rocky area with 30-40 cm sharp stones and soil between them. The light on Venus was described by Russian scientists as being as bright as Moscow on a cloudy day in June.