Thomas Cooke was born in the village of Allerthorpe in the East Riding of Yorkshire on 8th March 1807.Although born into a very poor family he would go on to become one of the greatest telescope makers of all time. (He had no connection with Thomas Cook, the holiday company).  His father was a shoe maker, and it was assumed that he would join the family business.

However Cooke had other ideas, he wanted to follow his hero Captain James Cook (no relation) in exploring the world. When ready to join a ship at Hull he was persuaded at the last minute by his mother to stay in England. To earn money he opened a village school and taught mathematics to the sons and daughters of wealthy landowners. 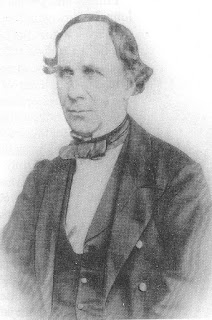 He moved to York in 1829 still teaching, it was then that he made his first telescope, using the base of a whiskey tumbler for a lens and some tin to make the tube.

In 1837 Thomas Cooke opened his first shop at No. 50 Stonegate in York with a loan of £100 from his wife’s uncle. Cooke had married Hannah Milner while teaching; she had been one of his pupils.

The instrument making business was an instant success. Cooke quickly gaining a reputation for high quality. Within a short period of time he was making not only telescopes but also, Microscopes, Opera Glasses, Spectacles, Electrical Machines, Barometers, Thermometers, Globes, Sundials, Mathematical Instruments, etc.!!

By 1844 business was so good that he had to move to new premises at No 12 Coney Street, York, here the orders for telescopes kept coming in as did a new venture for Cooke, making Turret clocks.  These behemoths are about the size of a medium family car and weigh about ¾ of a ton.  They can still be found in church and factory clock towers.

In 1855 he exhibited instruments at the Universal Exhibition in Paris and visitors were much impressed. Again the orders increases and yet bigger workshops were needed.

In 1856 The Buckingham Works was built on the site of the home of the second duke of Buckingham at Bishophill in York. It was one of Britain’s first purpose built telescope factories. Many of Cooke’s finest instruments would be made here; the factory would be used by Cookes until the 1940s. 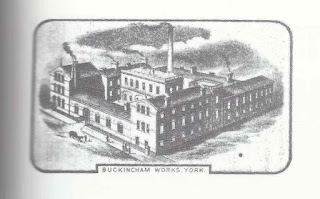 An order for a telescope was received from Prince Albert in 1860, and a magnificent instrument was built, in recognition for this work and under order from H M commissioners Cookes` at the 1862 exhibition in London were given a very prominent position for their display, and they received an embarrassingly large amount of orders.

Also at the great exhibition in 1862 was Robert Newall from Gateshead, a millionaire who had made his fortune making wire. He was also interested in astronomy. 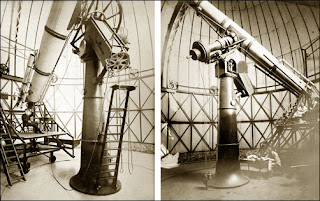 He purchased two lenses 25 inches (63.5 cm) across and asked Cooke if he could make him a telescope. He said he could and that it would take a year. Unfortunately Cooke was making a rare mistake. It took not one but six years to complete, it was actually completed a year after his death. When finished the telescope tube was 32 feet (960cm) long and the whole instrument weighed 9 tons. It was the biggest telescope in the world and it had been made in York.

Around 1866 Thomas Cooke started to produce steam cars, at least four and possibly six were produced. He used three wheels rather than four because he found it was easier to devise a steering system for just a single wheel. 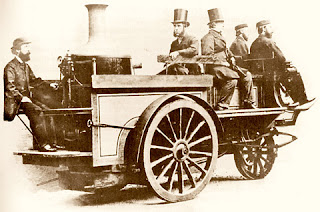 The steam cars travelled at 15 mph; unfortunately they were banned from the roads because they travelled too quickly. In those days a man with a red flag had to walk in front of any vehicle that was not pulled by a horse. The speed of a walking man is only about 4 mph. It would therefore be very dangerous to walk in front of this Steam Car.

In frustration he took the steam engine and placed it into a boat in which he travelled up and down the River Ouse. He wryly commented that no one with a red flag would bother him there.

Thomas Cooke worked incredibly hard during his life, one problem he had was he spent too much time working; sadly he literally wore himself out.

After the death of Thomas Cooke, the company was run for the next 25 years by his two sons Thomas Cooke Jnr who was an optician and Charles Frederick Cooke who was an engineer.

In 1893 H D Taylor who was Optical Manager at the Buckingham Works designed the Cooke Photographic Lens; it would become the basic design for nearly all future camera lenses. 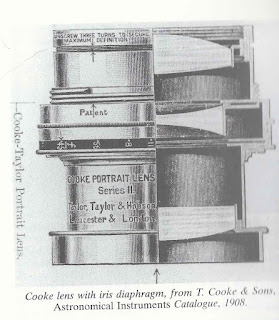 The last major astronomical project, a large transit instrument for the Greenwich Observatory began in 1932, it proved to be a disaster for Cooke’s. The company was hit hard by the great depression in the early 1930s and many of their skilled workers were laid off.

In 1938 Cookes sold the astronomical side of the business to Grubb Parsons of Newcastle. A new factory the Haxby Road site was built in 1939. In 1948 the Buckingham Works was sold to the Northeastern Electricity Board.

On the 1st January 1963 a new company Vickers Instruments was formed and replaced Cooke Troughton and Simms as a trading company.