Eclipse of the Sun and Mongol Invasion of Europe

Events which happen in the sky can often be interpreted by astrologers as portents of doom.  It is quite possible that when this eclipse occurred people would have been thinking back a few months earlier to the great Mongol invasion of Hungary and Europe.
On October 6th 1241 an eclipse of the Sun was seen over Europe 5 months after the battle of Mohi in modern day Hungary.

The battle took place on April 11th 1241 and saw the defeat of the Hungarian forces trying to stop the Mongol invasion of Europe. Following the battle most populated areas were destroyed in Hungary and around 25% of the country’s population were killed. 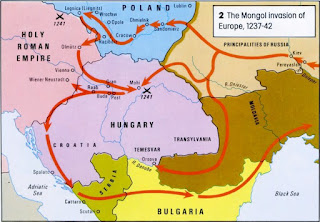